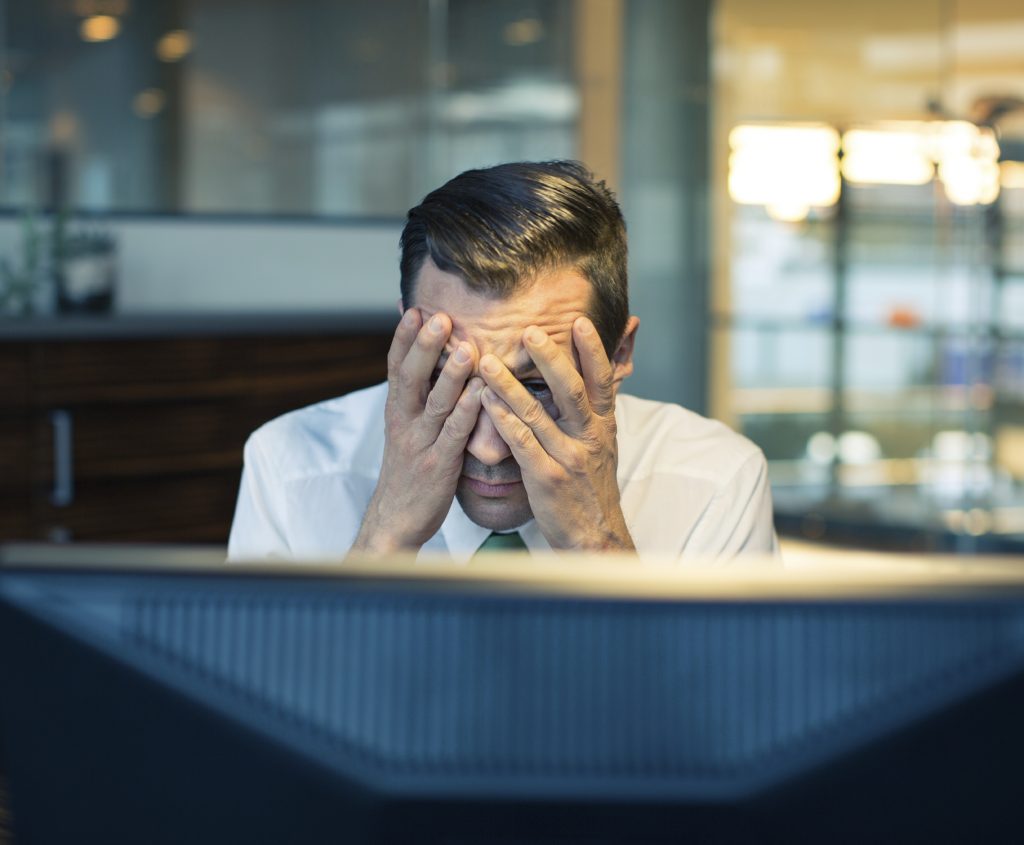 First coined as a term in the seventies, over the years burnout has not just become widely recognised, but has rooted itself firmly into our society.  To give you an idea of the pandemic proportions it has taken on, the Japanese and Chinese even have terms for ‘death-by-burnout’, caused by the alarming rate of suicides due to stress. It’s easy to blame the employer, but often times contributing factors are not necessarily within the company’s control. Tackling burnout instead means maintaining a careful balance between the professional and personal.

'A match burns bright before it burns out, and similarly a person with burnout will have put a lot of passion and energy into his or her work. That’s the upside. '

So what exactly is burnout? Stress. Plain and simple. Stress in itself isn’t necessarily a bad thing: after all it’s one of our oldest survival instincts.  It is important however that the goal is clear and attainable and the person feels supported. Stress only turns to burnout when a variety of factors build up over a long period of time, creating an imbalance between capacity and load, with no end in sight.

A match burns bright before it burns out, and similarly a person with burnout will have put a lot of passion and energy into his or her work. That’s the upside. It also means there’s a lot of ‘self’ involved, with emotional exhaustion, cynicism and a feeling of failure in the end when that ‘self’ isn’t rewarded every now and then.

Causes and Effects
For a long time burnout was ascribed to personality only. It’s true that certain characteristics make a person more susceptible to suffering from burnout. Interestingly enough the majority of these characteristics are what makes the candidate stand out for the job in the first place.  Character traits such as a strong sense of responsibility, perfectionism, idealism, not wanting to disappoint, needing to feel useful and easily offering help, are all highly attractive to an employer.  Balance these out however with the characteristics that are less easily spotted, such as trouble asking for help, introversion and an inclination to depression, and the need to safeguard a careful balance between a healthy amount of stress and unmanageable pressure becomes more obvious.

Where workaholism was worn like a badge of honour back in the 80’s and 90’s, today we are starting to realise it is not the basis for a sustainable lifestyle in the slightest.  There are a number of reasons for this particular swing of the pendulum, most notably the fact that we no longer feel in control. We don’t decide to come in first and leave last because we want to hit that sales target, but because cut-backs mean we have to do the job of three others.  Add to this an increasing expectation to be “always switched on” and it becomes easy to see how work related stress can spiral out of control.

Researchers agree that changes in society account for a large part of the problem. The flexible job market creates uncertainty; the balance between work and private life, especially when working partners also have to take care of a sick family member; (too) high expectations from both ends of the job; an increase in emotional load and openness about stress on the work floor mean we can easily become overloaded to the point of not being able to function anymore.

Workable Work
Despite recent legislation demanding that employers have a clear policy in place that protects workers from stress and burnout, only 15% of Flemish companies actually have one. Or, in the words of neuro-psychologist Elke Geraerts: “This century holds a lot of challenges: changing work-processes, technology that surpasses our mental capacity, the undermining of social structures. Self-knowledge and self-empowerment are necessary for survival.”

Research by the Flemish Stichting Innovatie en Arbeid shows that in 2016 a paltry 51% of employees on the Flemish job market had a job that earned the quality seal ‘werkbaar werk’ (workable work). This means a job that doesn’t cause undue levels of stress, over-straining or illness, that is interesting and motivating, that offers opportunity to learn and develop, and that leaves enough room for family and private life.

Hitting the Wall
Brussels-based psychologist Ioana Cirstea shares her thoughts on the subject. “I used to work for a bank and I currently treat a lot of people who work for multinationals. I notice more and more people are suffering from burnout. After the financial crisis it got worse. The crisis was used as an excuse for reorganisation. Companies concerns for profits dominated, meaning no new hires, causing the remaining employees to do the work of three others. Employees hit a wall when they don’t feel recognised for their work. They are tired, disillusioned, disappointed, have a sense of injustice and feel helpless because they feel their voice is not heard by management. People need encouragement, acknowledgment or even a raise in salary. The bottom line is: people feel faced with a big mountain and become demotivated when they’re not seen as people.”

Expats, high risk demographic?
The obvious question within the context of ReLocate is: are expats at an increased risk of burning out? After all, the pressure is on when an employer has invested so much in bringing you over.  We asked psychologist Ioana Cirstea, who sees a lot of expats in her practice.

“I’m an international myself. I left Romania thirteen years ago to study and live in the Netherlands, Spain, the USA and Belgium. International people in general are a special group and I like working with them, we share similarities. It is helpful for them to see someone who can relate to their problems. Of course it’s not difficult to find international clients in Brussels,” she laughs.

“It’s important to understand that culture shock can happen to anyone, no matter how short the distance moved is perceived to be.  Missing your family and friends, the (often extensive) travelling, … International people often lack a local support system, the network of people who can help them (both in and outside the job). They easily feel isolated, especially when there’s a language barrier. Visa and working permits also cause a lot of insecurity when they are temporary. In general the complexity is higher for expats, but anyone can suffer from a pressure overload.”

Yet expats are ambitious people, which makes them both resilient and receptive. “They set high objectives, they want to succeed and are willing to go great lengths to do so. At the same time they are more alone in life. Work becomes so important – it’s what they have here. So yes, maybe they are at higher risk for burnout or other stress related problems as they will probably not stop, even when their body gives them signals, because they have less options than locals. It’s not easy to change jobs unless you also want to change country which is an additional stress factor.”

Nevertheless, Cirstea sees a solution, including for expats: “Talk! Looking for a different job should be your last option. People who are suffering from burnout are more negative, both about themselves and the world around them. For internationals the possibility of having to go home, a failure, adds even more pressure. It would be great if companies would promote job mobility instead of having people stuck at the same position for three years.”

It’s the system, stupid!
Why all parties involved should make an effort
You can overcome your burnout, but if the system doesn’t change around you, there’s a large risk of it happening again, especially if the causes were predominantly context related. So what can we do? How can we start burning with passion instead of burning out? Governments, employers and employees share equal responsibility. The good news is that the taboo surrounding burnout is breaking down now that the problem has, quite frankly, become too big to ignore. Belgium acknowledging this by means of law in 2014 is an important step forward.

But more is needed, ideally in the form of awareness campaigns, a burnout prevention plan for every company, better access to cheaper psychological help (psychotherapy isn’t recognised as medical help in Belgium, making it very expensive and patients often feel a sense of shame about needing this help), and lots of training for individuals, including learning how to be a better worker.

As individuals we have to make an effort too, which includes asking for help when you need it, but management can help a great deal, starting by taking burnout seriously and installing a prevention plan that might include providing a clear job description for every new task the flexible, multi-available employee gets; providing space and time for tasks that need silence and concentration; team building activities to stimulate a sense of community; no emails over the weekend; respecting breaks; nap-rooms; holding meetings standing up to keep them short and effective; autonomy; challenge; support; feedback; addressing different skills; offering development of talents and skills. “Skills such as mindfulness, presence, active listening, and recognition and acknowledgement of emotions are the very skills that encourage teamwork, connection with colleagues, and recognition of common purpose,” the Institute for Healthcare Excellence website tells us.

The Psychologist’s View
“For me there were times when it was very difficult”, Ioana Cirstea shares her personal experience. “Even though I had nice colleagues and job security, being an employee in big company was not my calling. Fortunately, I found people who understood my difficulties and I was able to change jobs.”

“For Europeans life is easier because they don’t need a visa etcetera. This encourages working abroad and meeting other likeminded people.” To companies she’d like to say: “The intake is very important because the first month is difficult, help is needed with paperwork, registration. On the job itself I suggest coaching, training, whatever is needed for a smooth journey. People shouldn’t be thrown into the job but have a follow-up, a manager who listens to the employees and doesn’t minimize problems, who sees them as persons. Within the company freedom of expression, less competition, doing things together, talking about the challenges of the job, should all be normal.”

She admits it won’t be easy. “One person by himself cannot fix this. The employee can play a role but the problem is related to the way the work is organised, the culture, the management style.”

Does this mean it’s unhealthy to work far from home? “Moving around is becoming more normal. As long as the work is rewarding and the expat enjoys what he or she does it’s fine. To stay in your own country and not like what you do isn’t much of an option either. Instead, working abroad can be glamorous when you start out and ticks those all-important learning and experience boxes. Although once the honeymoon period is over reality can set in with a bump,” Cirstea confesses. “But you find ways to adapt. To answer the question, I don’t think it’s unhealthy to live and work abroad, on the contrary, I think it opens new horizons, you become more tolerant. Living and working abroad is enriching, but not easy.”

Presentation by Provikmo, part of ADMB preventie, a service for companies to help them with durable welfare policy. | www.admb.be/nl/provikmo