I wake up the next morning and receive a text from a friend asking whether I fancy joining them for a New Year’s Eve party. With a glass of wine in one hand and my phone in another hand I bump into Dominic, who looks at me with curiosity and asks me what kind of questions I am looking to be answered. His girlfriend is visiting for a week, but that doesn’t stop him enthusiastically talking about his experiences in Val Thorens and abroad. 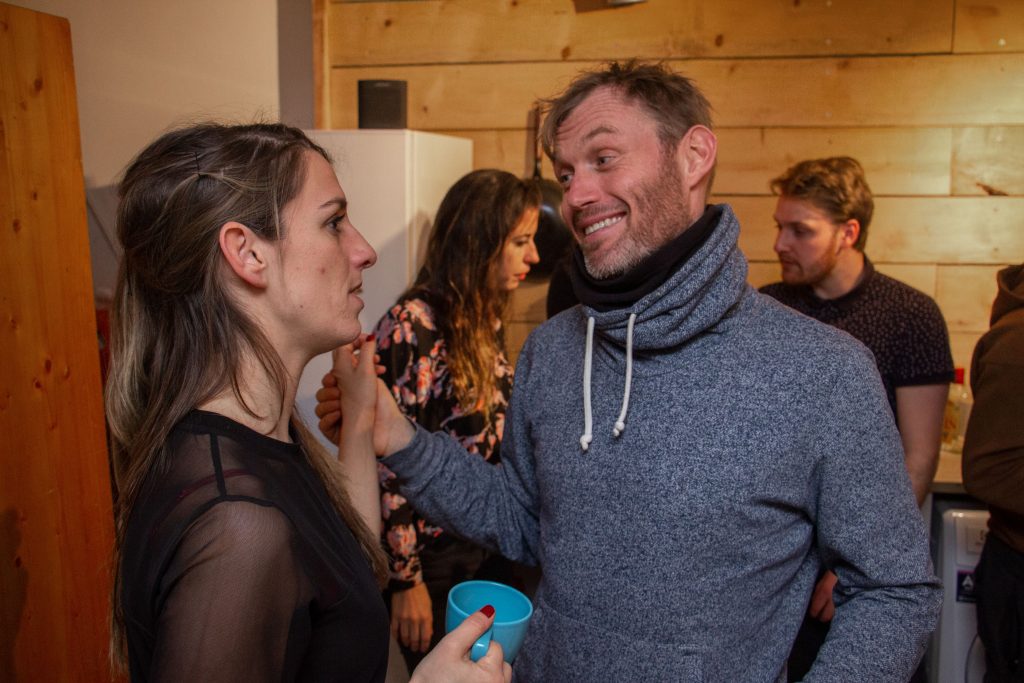 Dominic, 39, is a salesman in a Val Thorens ski shop. Picture by Arno Van den Veyver.

For the first time ever, I knew that what I was doing was meant for me.

“As a child, I was always the odd one out. I couldn’t settle at school or at home and always felt uncomfortable. I often felt like I was missing something, or that I was doing something that didn’t suit my character. My parents lived structured lives and weren’t open to trying new things. Sometimes I was asked by friends to go snowboarding or skiing, but I was never allowed to join them. As a family we went on holiday to Greece and just lay on the beach, with nothing to do. I’d decided on a career as a gymnastics teacher after high school and enrolled for a Bachelor degree. Sadly, my father became very ill during and passed away. As a result, I stopped studying and eventually dropped out.

After my father’s death, my mom encouraged me to resume my studies. When I obtained my diploma, I started working at Sport Vlaanderen, at the time still known as BLOSO. I went to sports camps and started doing seasonal work during summer. This brought me in contact with water sports and reminded me how crazy I had always been about water. My interest in water sports continued to grow and that first winter I left for a surf camp abroad. From then on a whole new world opened up for me and I would spend my summers working for an interim agency in Belgium, so that I could go on surf and sports camps with tour operators during the winter. The interim jobs were very diverse. One year I worked as a teacher, the other year I worked in a factory. I got to know a lot of people, gained a different perspective on life, and for the first time ever I knew that what I was doing was meant for me.

I enjoy teaching children and young people but I don’t want to be part of the Belgian education system. Working day in, day out and returning home, following a lot of rules and bumping into a huge number of procedures doesn’t suit my character. I need to be outside and experience freedom. I find inner peace abroad, but not in Belgium. Africa, Jamaica, Sri Lanka, Indonesia,… you name it; I have lived and stayed everywhere and nowhere for a while.

In between and during these travels I had a few relationships, but it was only when I got to know Irina that the picture felt right for the first time. She also worked in education but was open to my lifestyle and suggested doing a winter season together. I had no clue where we would end up, but in Val Thorens I learned that I could have started working the snow seasons much sooner. I’ve never regretted starting seasonal work at such a late age, but I have wondered why it never occurred to me before. I think it’s because of my upbringing; we didn’t know this life existed. My first year on the slopes was really tough. I had horrible working hours, a difficult supervisor and little time to spend on my snowboard, while Irina had the time of her life. The following year the roles were reversed. Irina felt fed up with seasonal work and quit.

Nowadays she only comes to visit occasionally. We’ve had a lot of arguments about this and it’s not easy, because I can see myself building a life here. I dreamed of starting a company together, in the mountains or on the beach, but her future is back in Belgium. I don’t know what that means for our future as partners. Fortunately I have a girlfriend who has been on a winter season and knows what it means to me. I’m sure we’ll work it out together in the end.”