That same evening I meet Tine, at the bar of a hotel. She’s working as a receptionist and offers me a conversation, a cocktail and a big smile. When she shares her life story I become so engrossed I lose all track of time. 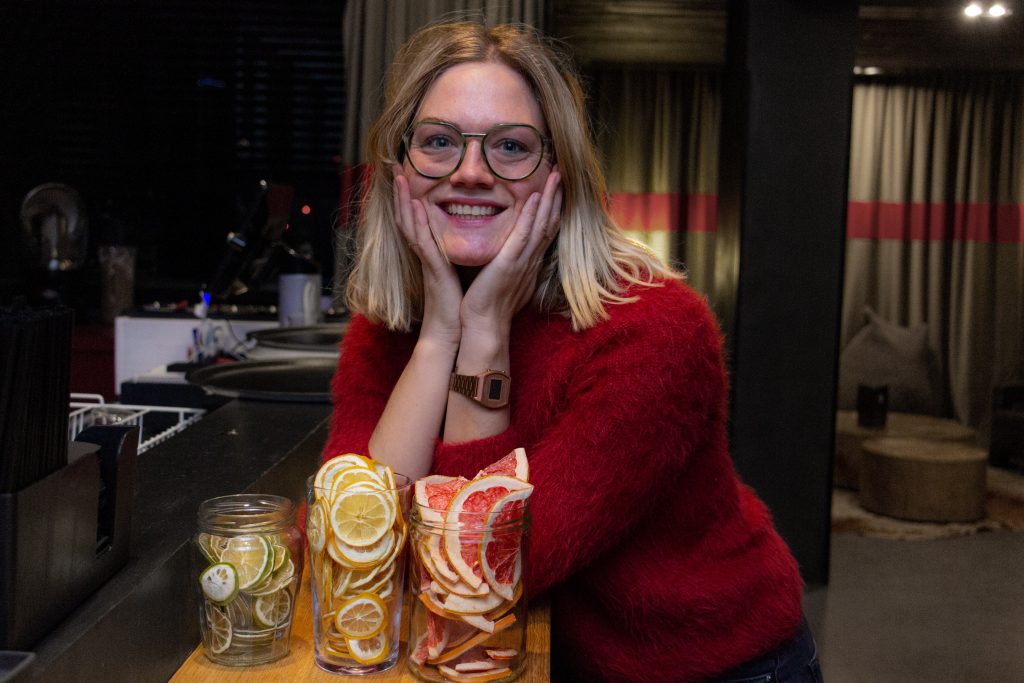 I learned at a young age that when I run into a problem, I can't expect others to solve it for me.

“I’m originally from West Flanders but ended up moving to Ghent for my studies. In the end, I stayed there for ten years; quite a long time. I studied the former D-cursus to teach kids, lived together with my partner, and had a good job in education. But the picture shown to the outside world wasn’t real. I was in a toxic relationship where there was no room to fulfil my dreams. After a lot of fights, I gave up. I quit my job, left my ex in the house that I loved, registered my address back with my mom, traded in my permanent home for a backpack and left for Cambodia. With the money I had saved from working extra hours in the coffee bar, I could finally leave. Making a long journey on my own had always been a dream of mine, but I didn’t want to abandon my relationship. I also didn’t want to leave my house because I was the one who found it and absolutely loved it.

In retrospect, that house turned out to be the obstacle that prevented me from experiencing the true freedom I had always pictured in my head. I was so afraid of taking a step back from the social perspective that I put my own dreams aside. No one, not even me, knew how long I would stay in Cambodia. I had the time of my life there, but I missed my family. After ten months I returned for one of my godchildren’s birthdays. I arranged my return in secret and suddenly I was on the doorstep of my mother’s house, ringing the bell. My sister in law opened the door and when my mum heard my voice in the background she almost collapsed of a heart attack when she saw me with my suitcase. At first I found it very difficult to live with my mother again. It felt like a big step back and I was afraid that I’d have to give up much of my freedom out of respect for her. However, it finally gave me the chance to grow closer to her and now my mom knows me better than anyone.

I had already gained some experience with seasonal work in Empuria Brava, and after being back home for a month the travel bug started to itch, so I left again. This time to Mimizan with Flowtrip, a tour operator that organises surf and sports camps for young people. I was appointed as a supervisor and soon realised that I really enjoy working with young people. I met a close team that worked together as a family. That family aspect attracted me so much; I needed more of that. I wanted to learn more life lessons like I had done a couple of years before.

At 23 I left for South America with two girlfriends. At a certain moment, my bank card no longer worked. A quick money transfer from Belgium wasn’t an option, as the bank was closed due to a public holiday. Because we had a fixed itinerary and my two friends couldn’t lend me any money, I ended up alone in Pas la Pas, near Santa Cruz. There I was, a young girl, without money or a cell phone. At first I was very angry, but soon I realised that my girlfriends were only responsible for their own actions and I was for mine. I didn’t have a mobile phone and calling from an internet cafe was not an option as when it was day in Belgium it was night in South America and vice versa. So at night I secretly used the computer at the reception of the hostel I was staying in and after trying out many ATMs I finally got some money from the wall. That situation changed everything for me. I learned at a young age that when I run into a problem, I can’t expect others to solve it for me. I met those two girlfriends later during the trip and eventually forgave them. Our friendship even survived them leaving me behind, which I am very glad about. My mum and sister were extremely mad at the girls when they found out that they had left me on my own. From their perspective travelling together means coming home together too. That trip taught me a lot. It helped me overcome my fear of being alone and made me realise that you are always dependent on yourself.

When I was working in Mimizan they indicated they were looking for someone to work in the mountains and I didn’t hesitate for a moment. And here I am. In my third season as a saisonnier in Val Thorens. This year I’m working in a hotel, but it changes every time. I keep coming back because I’ve come to know everyone. When you walk outside, everyone greets each other, which isn’t the case in Belgium. That warm feeling and meeting a friend in the snow remains special. When I’m in the mountains I have little contact with friends from Flanders. I’ve never had a large group of friends and I am a character initiator. I believe that your life consists of different phases, during which you surround yourself with different people. Every phase is of a temporary nature, so often contacts are too. You can’t keep in touch with everyone and that’s okay. It may sound harsh, but if I want to be in contact with everyone on a regular basis, I’d be stuck on my mobile 24/7.

My mum sometimes asks me when I’ll ever lead a stable life, but I can’t answer that question. I don’t know how long I will continue doing this; every time I leave for the season I ask myself the same thing. Sometimes I’m tired and think about what I am doing and wonder what’s happening in Belgium, what I’m missing out on. But working as a saisonnier can last for the rest of your life, even if you want to start a family. Nothing prevents you from combining the things that make you happy with the lifestyle you want to lead. My ultimate dream is to create my own project and live for it fully while travelling constantly.

I advise everyone to work as a saisonnier once in your life. It opens your eyes and forces you to think about what you really want in life. That doesn’t mean that everyone is suited to it. You have to be able to be away from home for a long time, master several languages and be an open person who wants to learn. Travelling has taught me that not everyone you meet is of good will, it certainly sharpens your knowledge of people. The fact that someone at home, in my case my mom and family, lets you go and supports you, gives a solid foundation and the necessary sense of security. Having someone who believes in you is a must if you are alone for a long time.

Sometimes I am firmly convinced that I want children, such as recently when I held a colleague’s baby in my arms, but I realise that these moments are snapshots and I actually don’t know for sure yet. And that’s just fine. So many people never consider what they really want out of life. 60% of 18-year-olds just choose an education after their secondary education because they feel they have to do something in society. The fear that they won’t achieve anything and their children won’t do what they expect is a motivation to do the same job day after day. When I was 21 I wanted to leave on Erasmus, but I didn’t because I had a sweetheart. During my second relationship I wanted to travel together, but it never happened. It’s taught me that everyone must decide for themselves what they want to do. You can’t place the responsibility for choices made with someone else; you are the only one who has to live with them. If you don’t want certain situations to come back in your life, you must dig deep and explore your behavioural patterns so that your events also change.”