That question came to my mind when I first visited Val Thorens. I could never imagine why anyone would agree to a shabby wage, working ‘flexible’ hours (which means practically 10 hours a day) and not being able to spend time with family and friends for months. I drove 11 hours to Val Thorens in France, the highest ski-resort in Europe to find seasoners or ‘saissoniers’, to ask what about life here is so special they would come back every year. 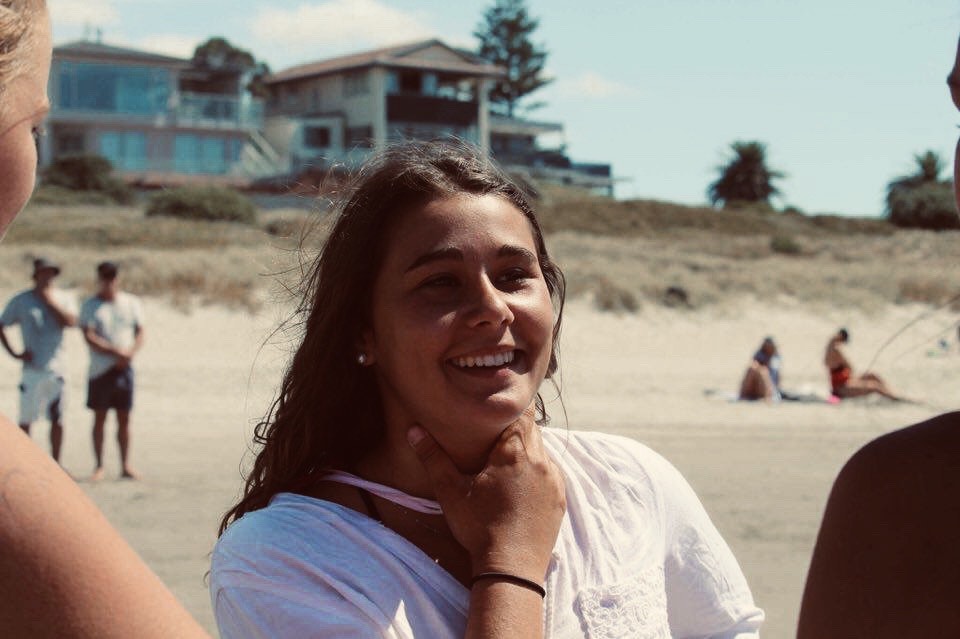 Nina, 18, works as a ski woman in Val Thorens and as a life guard in New Zealand. Image property of interviewee.

I firmly believe you can be anything you want to be in life, providing you work hard for it.

A day after arriving to the village in the middle of the night I meet Nina, a 18-year old girl who spent last year’s winter season in Val Thorens as a ski woman. A ski woman ensures that your skis get to you in perfect condition and takes care of the sale and maintenance of all kinds of equipment during the winter season.

“I first came to Val Thorens as a toddler. My mom and dad both worked here as saisonniers. They took their kids everywhere with them; I think my parents were seen as pretty open minded back then. They met when she was 14 and he was 24. The age difference didn’t bother them at all. My mom was a free-spirited woman and when she turned 17 she wanted to study abroad. When my mom decided she would relocate to study photography, my father gave up the shop he owned in Hossegor, where he sold skate & snowboard gear and followed my mom, who is originally from Biarritz, to Courchevel. He was scared that if he let her go, he would never see her again.”

“They both worked in Courchevel for three seasons, in between renovating a  house in Biarritz. They continued this lifestyle even following the birth of my sister and I. Winters in Courchevel flew by and while my sister started doing competitions, I was born. After a while my sister’s competitions started taking her beyond Courchevel. That’s how our family ended up coming to Val Thorens for the first time. We liked it a lot so we kept on coming back and my parents knew everyone who lived here.”

“Sadly enough the relationship between my parents didn’t last. My mum secretly met other guys, something the whole town gossiped about it. They fought a lot and haven’t seen each other since the day they broke up. I still don’t know how my sister really feels about it all, we’ve never spoken about it. I left school at 16 because I didn’t see the point in studying for a diploma. I believed, and still believe, you can become anything you want in life, providing you work hard for it. Two years ago I left for New Zealand and, inspired by my dad, I got my certificate as a lifeguard.”

“After coming back, I had no idea what to do with my life and so I applied for a job in Val Thorens during winter season. Since one of the shop owners’ is my dad’s best friend that wasn’t so hard. I stayed the whole season and loved every bit of it. The people of Val Thorens feel like family now and that’s why I came back this year just for a holiday, to spend time with the family I’ve built here. In 20 days I will leave to New Zealand and see what the future brings. Maybe I’ll return, maybe I won’t, but that non-settled life is the freedom I seek.”

After being forced by President Macron’s non-negotiable decision to to leave their house and job within 48 hours I called up some saisonniers to see how they were doing. Most of them fled the village immediately, although a small core decided to sit out a quarantine of at least two weeks. These anciens in particular were not prepared to leave their winter life all of a sudden, with some not even having anywhere to go. These last days have been spent getting groceries from the last open store  and preparing for an eventual outbreak of the virus. Infected people are in a strict quarantine or taken away to a village lower down. However, since the slopes are abandoned and there is barely any police control, some tourists see this as a perfect opportunity to build their own snow jump and freeride those mountains. Even though this is strictly forbidden, the unclear communication of the village itself causes people to ignore the rules and troop together for house parties or outside on the slopes. Today’s Val Thorens looks nothing like it usually would during March, and although saisonniers tend to be flexible when it comes to leaving their jobs and homes: this abruptly ended season of 2020 will never be forgotten.