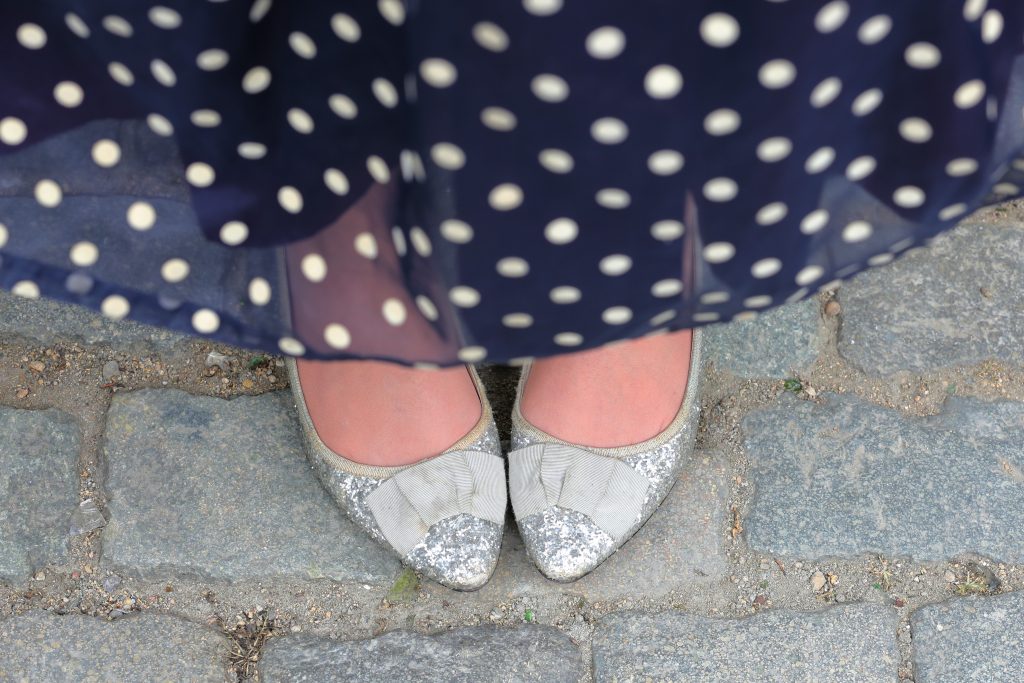 Every professional branch has its opportunities abroad and the arts are no exception. Not every expat, however, has a team of professionals at his or her disposal when they cross borders for a new professional challenge. Some people just venture out and make do by trial-and-error… and a lot of socialising.

'“I didn’t even know it existed! It was such a completely different world and I threw myself into it. I knew then that I was going to be a singer.”'

Soprano Nicola Mills (1976, Lancashire, GB) knows all about facing the big unknown. Besides singing in the chorus of the Vlaamse Opera, Nicola’s also known as The Down to Earth Diva. We meet at a wine bistro just around the corner from where she lives in the Antwerp Zuid area. It’s a lovely December day; pale blue sky outside, the warm guitar sounds of Django Reinhardt on the loudspeakers indoors.

I half expect her to show up wearing the polka dot dress she features on her website, but today I get the ‘real’ Nicola. “Putting on that dress helps me switch to my singing mode and being a singer. A colleague gave it to me about a year ago. I had to go to rehearsal, so I couldn’t try it on right away, but all I could think was ‘I hope it fits!’ It’s funny,” she says, “because that’s how it all sort of started.”

A Different World
Nicola has been venturing out as a solo artist for years, singing for charities, events and, more recently, with a group of singing waitresses in a surprise flashmob act. However when she’s not at the opera, you will often find her singing arias on the streets of Antwerp. Why would someone with a day job risk a cold? Out of love for singing and wanting to bring opera to people who don’t normally visit the theatre is the more superficial answer. The underlying reason though, is of a more personal nature. “My anxiety was stopping me from enjoying my solo career and I was getting more and more frightened to do it. I couldn’t perform anymore; I was scared to face an audience, scared that no one would want to listen. It was time to face my fears, so when I saw someone in Brussels do it, I thought ‘I can do that too’.”

It wasn’t the first challenge on Nicola’s path to becoming an opera singer. “I come from a working class background,” Nicola tells me over a bowl of soup. “We didn’t have a lot of money and I was the only one with any musical talent. Luckily there was a great musical centre that I could go to. I was seven when I started playing the trombone, but after a while it became clear that I really wanted to sing. Even then I was battling shyness, but at some point I decided to join the choir and I absolutely loved it. One of the teachers, Barbi Hankinson-Parr, thought I had talent and she offered to give me free lessons. I was fifteen by then.”

Hankinson-Parr was crucial to Nicola, because she encouraged and helped her enter competitions, exams and, ultimately helped her to get a place at The Royal Scottish Academy of Music & Drama in Glasgow. “I didn’t even know it existed! It was such a completely different world and I threw myself into it. I knew then that I was going to be a singer.”

After graduating her fears started to come back however, and Nicola decided to play it safe: she went back to the North of England to get married and become a singing teacher. “I did keep singing, but never fulltime. There were too many battles going on in my head and I was just too scared to really go for it. I was afraid of failure.” It was a week of concerts for elderly people in homes that made her realise she had to give up teaching: “My heart needed to sing,” Nicola emphasises. “I left my husband because I realised I could never live the life I really wanted to live if I stayed.” She was thirty by then.

“I trust life will take us where we need to go”

Dramatic High
An audition landed her at Glyndebourne Festival Opera, ‘one of the most renowned opera houses in the world’. “I moved to London and finally started living the life I’d always wanted.”

After London came Amsterdam. She felt that it would be good to move to a different country and experience a different language, so she secured a place at the Opera Studio in Amsterdam. “I wanted to live somewhere else and my gut told me to ‘do it now or it will never happen.’ The course itself was disappointing, but I had a small salary, the opportunity to work abroad and to experience a new culture.  The move led to work all around The Netherlands, starting with Dutch National Opera and then a debut at Het Concertgebouw.  I enjoyed so many good experiences whilst living there. I was always worried that I had left it too late to really make it work as a singer, but since leaving my husband I’ve never been out of work as a singer. I’ve been a full time singer now for 10 years. My worries were for nothing.”

Nicola’s life reached a dramatic high when her Dutch partner left her. “It broke my heart.” She joins her hands in front of her heart, while rolling a pair of dark brown eyes to the ceiling. “I didn’t know what to do but I always trust life to take us where we need to go.” Her answer came in the form of a contract with the Vlaamse Opera in Antwerp. The permanent job finally gave Nicola the solid base she needed. “I really didn’t want to start over once again, but moving here has turned out to be one of the best things I’ve ever done. I could hide in the choir on the one hand and build a life, healing myself and finding a better balance on the other. After Amsterdam and London, Antwerp was such a relief. Life is slower here. It’s the perfect place to turn from a caterpillar into a butterfly.”

Christmas Carols
Nicola was preparing for her first solo concert as The Down to Earth Diva, around the time she decided to make her debut on the Antwerp Meir.  The show became a story of her life with recordings she remembers from her childhood that have helped shape her as the singer she is today. The theatre needed some pictures “and that’s where the dress came in. It fit my body and my goal perfectly. Somehow everything started to piece together: someone wanted to help me with a website, I was advised to make a flyer and cards, and bought an amplifier and microphone. Everything pointed in one direction: go out there and sing.”

With her solo performance, Nicola found a way to unite her inner diva with her more humble, grounded alter ego, appealing to both opera lovers and passersby that would never set foot in an opera house. “I still have my anxieties but I enjoy singing solo again. I really love giving to people, making them happy by singing and healing myself all at once. I feel that’s my role; my way of contributing to a better world.”

Before Nicola rushes of to sing Christmas carols on the Meir, she admits to missing friends and family. “I love it here, but I will try to create more opportunities to sing in England so I can be with them more often. If I can sing on the streets here, I can do it anywhere! If there’s one thing I learned it’s this: face your fears, you never know what might happen if you do.”