How do expats experience life outside of the office in their adopted home countries? Expat network InterNations surveyed their membership on 43 individual factors that influence an expat’s experience. The survey delves into issues ranging from reasons for moving abroad to how easy it is to make friends in your adoptive country. Ranked in 65 expatriate destinations around the world, respondents were also asked to rate factors on a scale of one to seven. With over 12,500 respondents representing 166 nationalities and living in 188 countries or territories, the Expat Insider survey provides a unique insight into what life is like abroad. We wanted to know how Belgium fares on a global scale. 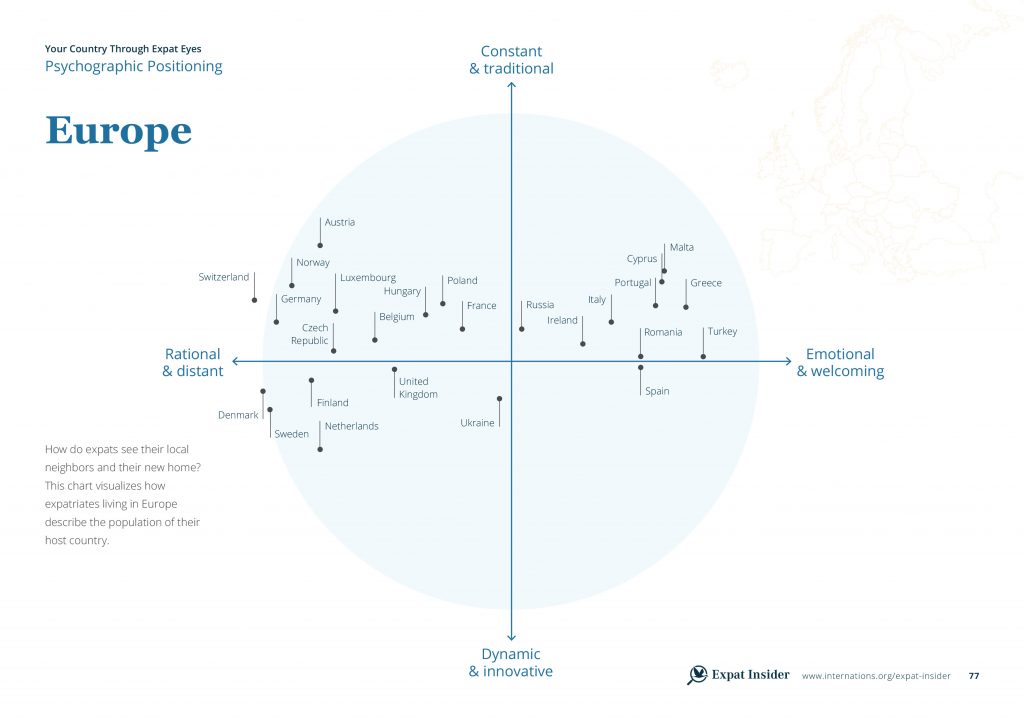 'Belgium boasts an overall ranking at the 16th place for Family Life and does best when it comes to the Quality of Education (10th) and the Cost of Childcare & Education (10th).'

Primary Motivations for Moving to Belgium

Without a question, work is the most important reason for moving to Belgium. Almost a quarter of survey respondents found a job in Belgium of their own accord, 13 percent of respondents were assigned by their employer and 9 percent were recruited here. After work comes ‘love’ as the most important motivation for moving to Belgium with 17 percent of respondents relocating for their partner’s job or education and 11 percent of respondents wanting to live in their partner’s country. These figures closely reflect the survey’s overall results, with the exception of those who found a job in their adoptive home country on their own (22% Belgium vs. 12% global).

As any expat will tell you, having a support network is essential to settling in somewhere new. Whether this means weekly Skype calls back home or joining friends and family in your adoptive country for a drink, surrounding yourself with those who can offer moral support and knowledge is key. The vast majority of expats (77%) report they did not have any friends or family living here before deciding to move. Of the 23 percent that did have friends or family here only 8 percent had a support network in the same city.

Just as cultural differences matter, so does language. For the ease of Settling In Index, the Expat Insider survey looks at language: out of all the subcategories for this index, Belgium performs best when it comes to language, ranking 30th. Just over a third of respondents (36%) agree that learning the local language is easy, but 56 percent say that it is easy to live here without speaking the local language (vs. 33% and 46% respectively, across the world). Moreover, a large proportion of expats in Belgium (62%, including 8% who are native speakers) say that they speak the local language at least fairly well, compared to only 54 percent globally saying this about their host countries’ local language.

Beyond the Expat Bubble

Though stereotypes are all about expats tending to stick together, the InterNations survey suggests that the proverbial ‘expat bubble’ may be on its way out. Although almost half (46%) of expats report their social circle mainly consists of other expats, another 43 percent say it is made up of a mix of locals and expats, showing that expats do socialise outside of the ‘bubble’. These results contrast with the global responses, where just a third (33%) have mostly expats friends and the majority (48%) enjoying friendships with fellow expats and locals alike.

Half of the respondents (49%) say this is due to the fact that most of their work colleagues are expats too and 41 percent believe that expats make up a high percentage of the Belgian population. Just 13 percent live in an expat neighbourhood and a mere 7 percent report their partner has mainly expat friends. A quarter of all expats surveyed regularly attends expat events or belong to an expat club or site.

Ease of Settling in

“When it comes to the Ease of Settling In Index, Belgium ranked 45th out of 65 countries overall,” says InterNations Media Spokesperson Vera Grossman. According to the Friendliness and Finding Friends subcategories, Belgium ranked 54th in both. Just 55 percent of expats rated the general friendliness of the Belgian population positively, compared to 70 percent saying the same about their host countries globally. Furthermore, only a quarter of respondents agree that it is easy to make local friends, whereas 42 percent say this globally. The fact that 45 percent of expats regard Belgians as distant rather than welcoming might play a role here.

Although Brussels ranks 29th overall according the Getting Settled Index (the city-counterpart to the country-specific Ease of Settling In Index), it ranks 40th for the subcategory of local friendliness. However, 51 percent of expats in Brussels rated the general friendliness of locals positively. And in addition 43 percent of expats agreed that it was easy to make friends in the city, compared to two-thirds of expats worldwide.

Belgium boasts an overall ranking at the 16th place for Family Life and does best when it comes to the Quality of Education (10th) and the Cost of Childcare & Education (10th), despite the fact that only 44% of parents feel childcare to be easy to afford. Belgium even manages to outperform Sweden (2nd place) and is hot on the heels of global number one Finland when it comes to children’s general wellbeing. About 50% of expats opted for a local state school, whereas 26% choose an international school and only 2% opted for homeschooling. Eigthy-four percent of families are satisfied with their life in general in Belgium, compared to a global average of 80%.

The survey results show a gap between satisfaction with personal finance (23rd) and cost of living (40th), which led us to ask InterNations what in particular was viewed as being expensive about life in Belgium. “Although the survey did not ask expats what they found most expensive,” Vera tells us “we did ask participants to rate the affordability of healthcare and housing, in addition to the question on how they rate the local cost of living. So, we cannot say what is the most expensive thing, rather the Cost of Living index aims to give a general overview of expats perception of costs in their host country. The Personal Finance Index, on the other hand, takes into account respondents’ satisfaction with their financial situation and in how far their disposable household income is enough to cover daily costs.” In numbers this translates to 51% of respondents feeling housing is affordable and 73% feeling healthcare is affordable in Belgium. With regards to disposable income, 47% felt it was more than enough for daily life, 38% felt is was about enough and 15% reporting their household income to be insufficient.

Getting to know the locals might not be the easiest but expats in Belgium generally report they are quite happy living there. When it comes to career and work-life balance, Belgium ranks above the global average coming in hot on the tail of the top three global destinations: the Czech Republic, New Zealand and Bahrain. With the global average for overall job satisfaction clocking in at 64 percent, no less than 67 percent of expats in Belgium report being satisfied with their jobs. When it comes to work-life balance, 62 percent of survey respondents report they are satisfied with their personal lives thanks to an average working week of 42 hours (44.3 global), compared to a 60 percent global average. On top of that, job security is where Belgium outshines the global average with 69 percent vs. 57 percent. Finally, the career prospects in Belgium satisfy over half of respondents (54% vs. 53% global), with the state of the economy keeping almost six in ten happy (58% vs. 56% global).

For the global survey results visit the internations website: www.internations.org/press/press-release/